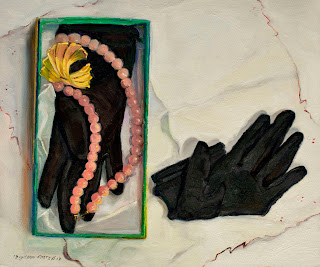 When a woman dressed to go out in the 1950's she wore gloves, a hat, jewelry, a purse and shoes that matched, and carried a handkerchief.

Gloves were worn everywhere in the 1950s and completed a woman's grooming. Without gloves she was not properly dressed. Clean gloves were also the hallmark of a lady and white or cream were the most favored gloves.

Gloves worn in so many colors were usually made of cotton as this was more affordable than leather gloves or the newer nylon and they could be washed very easily.  Even so many women owned a special pair of leather gloves.

The formality of wearing gloves even continued into the sixties with interesting cut out peephole variations in the popular stretch nylon and designed almost like a golfing glove. By the 1970s gloves were more used functionally for keeping the hands warm than for any other reason.


Posted by Leighann Foster at 9:46 AM No comments: 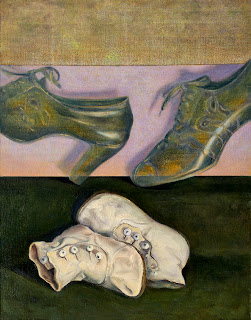 The child’s shoes date to the turn of the century. They have been worn and have white glass buttons that probably needed a buttonhook.

After researching the lace up shoes they could be from the 1920’s to the 1940’s. This seemed to be a style that was an old stand-by and made over and over so they fit into several decades. They have never been worn and the laces weren’t laced and tied up to the top like you find shoes in a shoe store that have never been tried on. I remember my grandmother wearing shoes like this.


Posted by Leighann Foster at 8:58 AM No comments: 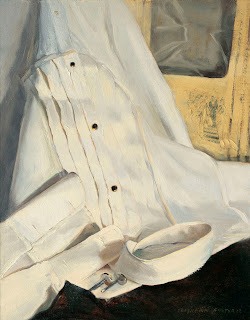 I found this man’s dress shirt in a box in an Antique shop. It did not have buttons, cuff links, or a bow tie so I had to find these to complete the shirt. The label on the shirt said Arrow Shirt Company. There was no date on the box but the style and graphics looked like around 1950. It is difficult to find men’s vintage clothing articles. There seems to be more available for women.

I have included a short conversation told to Bob Phibb, The Retail Doctor, www.retaildoc.com/blog, by Roger Leithead, the former CEO of Arrow shirts.

Arrow Shirts, a history.
The Arrow shirt concept came about in the 1800’s because men only wore white dress shirts and they all went to work in a suit. Even the blacksmith would work in that white shirt. Well this one guy was a singer and his wife didn’t like him coming home and changing into a clean shirt just to go out – especially since they only bathed on Saturday nights.  The idea of a detachable collar and cuffs made it easy to look presentable without all that washing.

This is the way Arrow built an empire of over 450 warehouses across the US filled with detachable collars and cuffs. It was a recipe for success: find out what the customer wanted and then give it to them.

A competitor, the Manhattan shirt company, had a shirt you could buy with an attached collar and cuffs but it was built like a tent with yards of fabric to tuck in. Also, the sleeve length was a 37.  That’s why guys wore armbands, so their sleeves wouldn’t reach over their fingers – like you see in barbershop quartets. At the time that was based on need, not looks.

Sales were dropping off and the Arrow CEO saw the trend was changing to a complete shirt.  He announced to his board of directors in 1930, “We will never get there doing what we’re doing now.”   That’s when something truly remarkable happened.

He went downstairs and gave instructions to open the doors of their main warehouse on River Street in Troy, New York, which bordered on the Hudson River. “Clear out the warehouse.” Using pitchforks, the warehouse men threw all of the existing collars and cuffs into the river.

Forget the environmental consequences of such an act of over 1 million dozen collars and cuffs floating down the Hudson. He threw out their entire inventory in order to make the changes needed.

They came up with 64 combinations of neck and sleeve lengths so that Arrow shirt fit you properly, not like a sack. They changed from natural ocean pearl buttons that broke easily, to plastic and invented Sanfordizing, which meant a shirt wouldn’t shrink. They again became the leader in men’s shirts because of the CEO realizing they had to change or die.

You think it’s tough to compete now? Imagine going into a retailer in the Depression telling them they needed all this inventory to serve their customers; where three models could capture the market, now they needed 64.

The CEO then had marketing come up with the “Arrow Shirt Man.”  Splashy ads in the best magazines touted how well an Arrow shirt fit.  It created a need for the women who purchased their husbands’ shirts to go into retailers and ask for that “Arrow Shirt.”  Retailers had no choice but to carry them and the rest is history.

Blog, www.leighannfoster.blogspot.com
Find drawings and paintings on SALE.
Posted by Leighann Foster at 8:33 AM No comments: