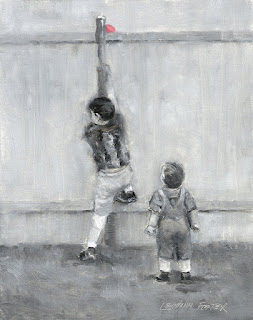 This is a painting of my two grandsons, Kent and Bodie, hunting Easter eggs. There was one more egg to find and Kent spotted it and climbed the fence to get it as Bodie looked on. I decided to paint this in gray tones so the egg would show up. 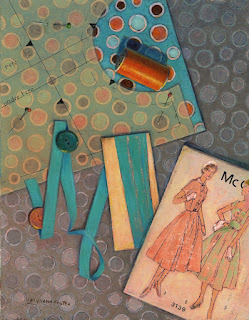 Making a Dress With a McCalls Pattern


Again, I found this pattern in an antique shop. I changed the position of the name and number for the sake of the painting's design but it is a pattern from post 1951 because the s was added to McCall.  The price of the pattern was 65 cents. I found a fabric that could have been purchased at this time. The notions are very much like what you can buy today.

I painted the fabric in first and let it dry. Then I mixed up the color for the tissue pattern and added Liquin to thin it down. The blue green fabric shows through and gives the illusion of the semi transparent tissue paper pattern piece. 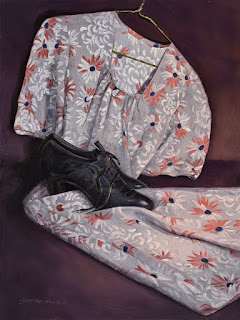 This dress belonged to my husband's mother and it is home sewn. I don't know if she sewed it herself or someone else did in or around the 60's. The fabric is a polyester and very soft and comfortable. I found some shoes in an antiques shop that might have looked like something she would have owned. This style of shoe spans quite a few decades as a reliable standby.

I painted the dress in grayscale to understand the folds and then I painted the pattern on top. I created a circular movement with the diagonal fold in the skirt leading to the shoes then up to the neckline with the gathers. Your eye is led to the hanger and down the sleeve on the right and back to the shoes. I wanted the shoes to blend in with the shadows to create a lost edge. When you squint your eyes you see an interesting dark shape that frames the dress. 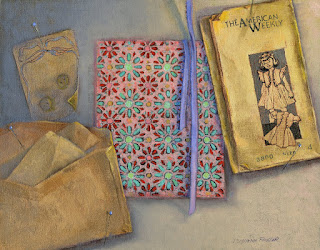 The American Weekly
I posted this painting before and recently reworked the pink fabric and ribbon.
Below is an explanation of the work.
My interest in this painting started with a mail order dress pattern I found in an Antique shop, which was originally bought through American Weekly Magazine. The American Weekly was a Sunday newspaper supplement published by the Hearst Corporation from November 1, 1896, until 1966. During the 1890s, publications were inserted into Joseph Pulitzer's New York World and William Randolph Hearst's New York Journal. Hearst had the eight-page Women's Home Journal and the 16-page Sunday American Magazine, which later became The American Weekly.

This pattern came from the pattern department of The American Weekly and was bought by a Mrs. Lester who lived in Devine Texas. The pattern was for a little girl named Carolyn, size 4. Mrs. Lester wrote the girls name on the pattern envelope. The pattern pieces are unprinted and it came with sewing instructions.

I tried to date the pattern but there isn’t postage. Apparently undated meters date mail order patterns. This one falls between 1930 and 1950 and costs about one to one and a half cents. It also has a serial number that narrows the date down from1933 to 1940.I bought this mail order pattern in an antique shop in Castroville, Texas. I was able to date the pattern because there was an address and postmark on the envelop and a little girl's name someone had written in in pencil.I  picked a fabric design from that time period and composed a composition that tells a story about a woman who bought a pattern from a magazine  to make a little girl's dress. 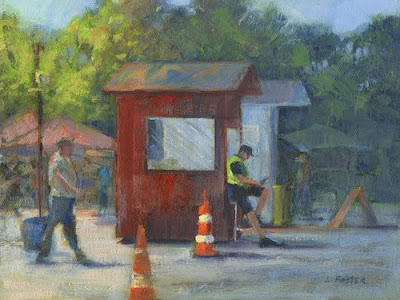 I was taking pictures at the flea market and just happened to catch this composition. I left out a lot of detail in the shadow area to contrast with the sunlit left side. I added heavier paint in the sunlit areas to make the space come forward  and thinner paint on the right for the opposite reason. Your eye goes to the only thing that is different which is the color of the guard's vest making it the center of interest. This painting received Best of Show at the Kerrville annual members show, 2016.

Read more »
Posted by Leighann Foster at 11:35 AM No comments: