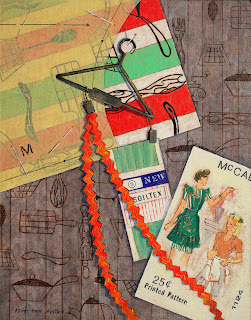 I found this McCall’s pattern in a pattern book from the 1940s. I drew a black outline of the fabric for the background and used the colored cloth to place the pattern piece on. Rick Rack was popular at the time for aprons and hems were finished with seam tape. The pattern only cost twenty-five cents at the time and many women sewed to save money.

The fabric is called “Atomic Kitchen” designed by the contemporary fabric designer, Michael Miller. The inspiration comes from Mid Century Modern Design dating roughly from 1946 to 1965. The art of textile design changed radically after World War II and Mid Century Modern was born. People wanted clean patterns, bright colors, and designs reflecting the positive developments of the period. The use of dramatic saturated colors, bold motifs, and black lines inspired from artists like Alexander Calder and Joan Miró brought the world of contemporary art into everyone’s home. Technological developments such as television broadcasting and space travel added to the inspiration for Mid-Century Designs. Sometimes you hear the term Atomic Design used to describe this style. Remember back to the 1950s when we saw satellite legs on furniture, rounded oblongs that reflected the new television screens, geometric shapes, satellite images and cowboy design from TV shows.

Blog, www.leighannfoster.blogspot.com
Find drawings and paintings on SALE.
Posted by Leighann Foster at 1:13 PM No comments: 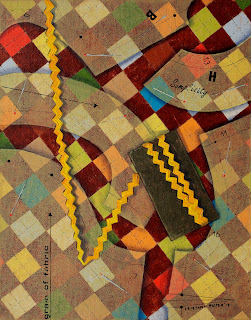 In this painting about home sewing, I used a fabric that is a reproduction from the 1950s. I laid out some pattern pieces from a Simplicity pattern for a little girl's dress. A Simplicity pattern at this time cost about fifty cents. The 1950s is regarded as sewing’s golden age even though the numbers waned a bit because the economy was booming and women could afford ready-mades again. But there was a strong focus on fashion sewing, designer patterns, and copying Hollywood looks. In some ways, sewing became more chic. In 1955, 52 million women and girls in the U.S. were sewing.

My inspiration for this painting was the Rick Rack. Rick Rack is a flat narrow braid woven in zigzag form, used as a trimming for clothing or curtains. Made of cotton or polyester, it is stitched or glued to the edges of an item. Its zigzag configuration repeats every third of an inch (about one centimeter) and is sold in multiple colors and textures. Rick Rack's popularity peaked in the 1970s and is associated with the Little House on the Prairie and the pioneer sentiment brought about by the 1976 American bicentennial.
The Many Names of Rick Rack
In the 1916 Needlecraft article, the word is Rickrack, another 1916 pattern book says Rick Rack and today, the trim packaging also shows it split into two words "Rick Rack". You'll sometimes see it spelled Rich Rac. Go back to the 1800s and you would be crocheting on a variation called Waved Braid. By 1916, they had dropped the "d" to make this Wave Braid. In the late 1800s and early 1900s, it was also called Zigzag Braid, Snake Braid and Corrugated Braid.

Blog, www.leighannfoster.blogspot.com
Find drawings and paintings on SALE.
Posted by Leighann Foster at 11:09 AM No comments: 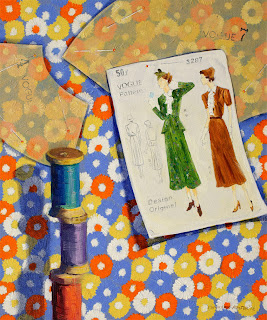 This is a Vogue Design Original Pattern from the 1930’s. Vogue was charging fifty cents when other pattern companies were charging fifteen cents. I have laid out some of the pattern pieces over the fabric to show transparency. The thread is wound on wooden spools.

The silhouette of women’s clothing began to change in 1928, because, according to Vogue, skirts could not get any shorter or waistlines any longer. The natural waist returned at the beginning of the period and remained throughout the 1930’s. By the mid-1930’s, the emphasis began to be on the broader shoulder line, initially developed through fuller sleeve shapes, and later with the introduction of shoulder pads, a style that would remain through World War II. Because a slender silhouette dominated dress styles at the start of the 1930’s, exercising, was recommended for slimmer bodies.

Joan Crawford’s famous designer, Adrian, widened her shoulders with ruffled sleeves and shoulder pads to make her hips look narrower and women wanted to copy Crawford’s style. Almost all dresses, suits and coats had belts. Gloves and hats were essential for day and eveningwear. The most frequently worn shoes were pumps that sat high on the arch of the foot. T-strap sandals and oxfords were also popular. Costume jewelry became popular in the 1920’s and continues to this day.

The fabric I used is a reproduction of a printed flour sack or feedback. The tradition began in the great depression and lasted into the 1950's. It is estimated that by the early 1940's over 3 million women and children were wearing some version of a printed feedbag garments.


Not only were flours sack designs simple, so was the concept. They were used as a promotion to sell more flour because the bag, or sack that the flour was packed in could be reused to make clothes. One of the reasons for there being thousands of different flour sack designs was the idea that the shorter the time that a particular design was available, more designs would be used. Women wanted more fabric designs and would therefore help drive demand for the flour.

Blog, www.leighannfoster.blogspot.com
Find drawings and paintings on SALE.
Posted by Leighann Foster at 10:04 AM No comments: 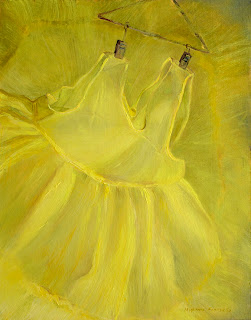 I found this child's garment in an antique shop. It is the slip worn with a more ornate dress for a small child dating to around the 1950's. The fabric is Organdy and I was intrigued with painting its transparent quality. I can remember wearing Organdy as a child and the fabric was very uncomfortable, but looked wonderful, crisp, and full. I wanted to know about Organdy and found the following information.

Organdy is very fine transparent cotton with a stiff finish. Crispness is due to a finish with starch and calendering which washes out, or a permanent crispness obtained with chemicals (Heberlein process). Calendering is a finishing process used on cloth where fabric is folded in half and passed under rollers at high temperatures and pressures. This polishes the surface and makes the fabric smoother and more lustrous. Fabrics that go through the Calendering process feel thin, glossy and papery. The Calendering finish is easily destroyed, and does not last well. Washing in water destroys it, as does wear with time.

Organdy wrinkles badly unless given a wrinkle-free finish bellmanizing which is a starching process. It may be bleached, dyed, printed, frosted, flocked, embroidered, or plisse, (a textile finish of permanently puckered designs formed by treating with a sodium hydroxide solution).

Posted by Leighann Foster at 7:52 AM No comments: